There are several high-tech machines that enable researchers and doctors to peer inside the human body, each offering its own individual benefits. Now, researchers like Professor Aigbirhio, of the Department of Clinical Neurosciences at the University of Cambridge, are using a sophisticated scanner which combines both Positron Emission Tomography (PET) and Magnetic Resonance Imaging (MRI). While both PET and MRI scanners are used to look at all parts of the body, dementia researchers predominantly use them to look at people’s brains.

Structural MRI scanners provide a static image of the anatomy of the brain. MRI scanners are effectively giant magnetic rings that surround the patient. The magnet causes the water molecules in the person’s brain to align with the magnetic field. Then, a radiofrequency current is turned on, pushing the molecules out of line. As the radiofrequency field is pulsed on and off, the water molecules wiggle. This movement of molecules is captured by the MRI scanner and translated into a monochrome image of the brain.

By contrast, PET scanners show physiological features of the brain at a cellular level, such as its oxygen and sugar use, as well as blood flow. By measuring these things, researchers can see where problems in brain functioning are occurring before they affect the wider organ. PET scanners use fluorescent dyes containing radioactive tracers to visualise this information, allowing researchers to follow the movement of these dyes around the brain to see how it is working.

The only problem is that the images PET scanners produce are fairly low resolution. Meanwhile, MRI scanners yield high-resolution images. A combination of the two allows the physiological responses from the PET scanner to be visualised over a clear MRI image – the best of both worlds. Using a PET-MR scanner, scientists can see more clearly where the biochemical effects are taking place in the brain.

This has incredible opportunities for dementia research. PET-MR scanners are helping dementia researchers to understand the relationships and time-course of different aspects of dementia pathology. Professor Aigbirhio’s team are using this technology to detect early biomarkers of dementia. They are doing this by developing novel radioactive tracers which have already produced images of a range of different microscopic proteins that appear when a person is developing dementia. The team are currently designing radioactive tracers to detect smaller and more toxic proteins called oligomers. At the moment, the proteins are only visible when they have linked together to form fibrils.

Through these new highly specified tracers, doctors will be able to detect changes in a person’s brain before symptoms are even present, leading to earlier diagnosis and treatment. Furthermore, the unique tracers will make it easier for doctors to differentiate between different types of dementia – which have previously only really been visible post-mortem – to give patients a more confident diagnosis of a specific type of dementia. This will enable patients to receive care and support that is better tailored to their individual needs. 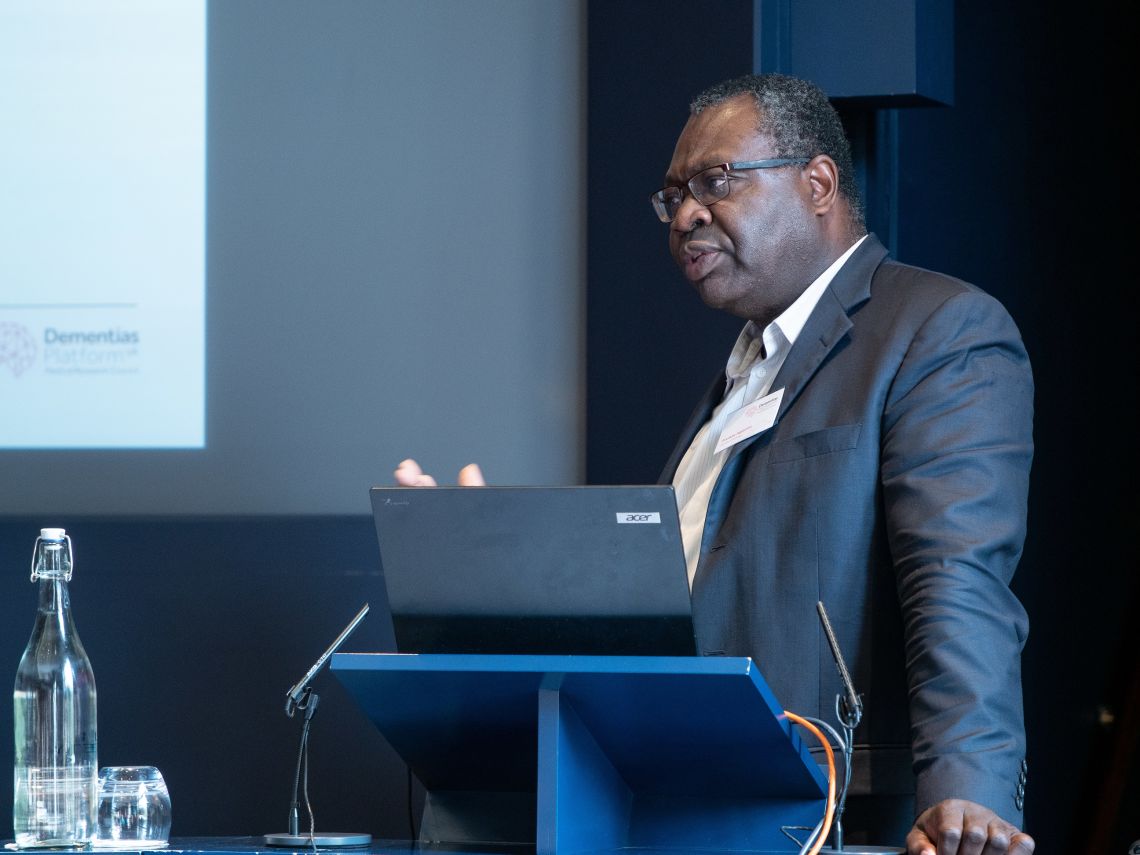 The webinar was organised by SONA, whose purpose is to champion neuroscience research and teaching in Africa, and to enable African researchers to thrive on the global scientific stage. Perhaps even more important than Professor Aigbirhio’s scientific message in this seminar was his message to young Black researchers. He said: ‘You may not necessarily be brought into conversations and opportunities, so you have to put yourself out there. Never be afraid to try or suggest something.’

Professor Aigbirhio leads DPUK’s Imaging Network, which is the world’s first nationwide brain imaging network. DPUK has funded a network of eight PET-MR scanners, manufactured by Siemens and GE Healthcare and based at universities and hospitals across the UK. The aim is to create a world-leading environment for applying advanced imaging to support experimental medicine and clinical trials in dementia research. Read more about the DPUK Imaging Network.